Multitasking: The Enemy Within 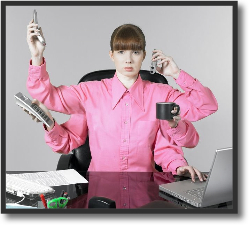 It really bothers me when I hear people say that they are good multitaskers. I hear this all the time, especially when I am interviewing perspective employees. How could everyone be good at multitasking? I’m not, and I consider myself to be an intelligent person. So needless to say, I was quite thrilled when I found out that new research had shown that our brains were not meant to do more than two things at a time — and certainly not with any real efficiency. This past week, I did a little research on the productivity of multitasking and found I was not alone in my beliefs. I discovered several interesting studies that backed up what I had already suspected.

Due to advances in the technology of medical scanning, science has recently been able to study how the brain works when it comes to focusing on more than one complex set of tasks at a time. What they had found was contrary to what was previous thought. The human brain is not capable of juggling several different functions at once and actually becomes overworked and stressed when put in these situations, sometimes even leading to a brain freeze. Think about it as the processor on your computer. The more software programs you have running at one time, the more stress on the processor to perform, leaving it to work less efficiently and sometimes even freeze up on you.

The man behind the research is Prof. Earl Miller, a neuroscientist at Massachusetts Institute of Technology in Cambridge, MA. Miller performed studies on volunteers who allowed their heads to be scanned while performing several different tasks and found out that while performing these functions, our brains have to actually scatter back and forth, leaving us much less efficient than if we were to just concentrate on one item at a time. What’s even worse is what he found when we try to actually concentrate deeply on the two items in front of us. We then put our brains on overload, causing ourselves at the very least some stress. In some, this overload can result in rage, and in some children, even autism.

While this was already enough for me to prove my point, I also found a psychiatrist at the University of London, Glenn Wilson, who goes on to put it another way. He says trying to perform just two simple tasks while sitting at your desk, such as texting and writing an e-mail, could take10 points off your IQ. You might be thinking to yourself right now, “How bad could 10 points be?” Well, some of us can’t afford to lose the 10 points, so consider this, 10 points off your IQ is the equivalent to losing one night’s sleep, or as Peter Bregman of The Harvard Business Review put it, “twice the equivalent of smoking marijuana.”

So if you’re a business owner reading this post, think about the last time one of your employees made you scratch your head or scrunch your brows. Is multitasking the culprit for their poor decision? I don’t know, but I wouldn’t count it out. What I would do is re-evaluate their job description and recognize that each task involved is unique, and you need to separate it from the rest. Make sure you visually display the workflow process for these tasks and make an arrangement in the way you would prioritize them if you were doing the job yourself. Don’t assume they can read your mind or would do them the way you would do them. And lastly, be sure to provide the correct environment for them to perform each one of these jobs to their fullest efficiency. Each job should have an environment of its own that you do not share with another.

We would all like to believe that we can do it all, but the truth is we cannot, at least not with the efficiency and effectiveness of someone who specializes in their job.