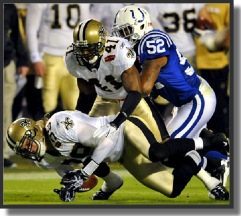 If you watched the Super Bowl a couple of weeks ago you saw a play that will probably go down in history as one of the boldest and gutsiest plays ever called. The play I’m taking about happened at the very start of the second half. It’s called the “onside kick.”

Most teams, especially in such a big game would decide to do the “normal” thing and kick off to their opponent. This gives the opponent a chance to possibly score first before they get the ball back. The play is usually reserved for moments of desperation at the end of a game.

There was no sign of despair when New Orleans Saints coach Sean Payton did the opposite of the routine way, not this time, not this day. He boldly made the decision to not wait to get the ball back to start the half. Essentially he sent a message, “We will not wait for our success to happen. We are going to make it happen.”

Ironically right at the end of the first half, the Saints opponent the Indianapolis Colts decided to play it safe. They had the ball, near their own goal line with over a minute remaining in the half and decided to go into a conservative mode and opted to run three times and then punt.

Indeed, it was strange seeing a team that generally made it’s name and reputation on making the big play, go into a shell and play it the safe and conservative way. Essentially they decided to wait until the second half. Unfortunately for them, the Saints not willing to wait, drove the ball and kicked a field goal to end the half to score three more points as they inched closer to the obviously “tight” Colts squad.

Are You Playing It Too Safe?

Why not take some lessons from both of these teams as you go about your “normal” sales day-to-day activities.

Playing It Conservative – Every sales person is faced with a choice to go into a shell and follow the customer and the way they want to buy things. How many times have you resisted and told them that you will not proceed their way? Remember that if you go into any negotiation always having to say ‘yes’ to every request a customer makes, you will almost always lose the negotiation. Be willing to say when you will NOT do things in an unproductive way.

Going For The Big Play – Are you turning the routine sales calls you go on into an event? What I mean is that we can all be lulled into a dysfunctional “sameness” in our work in the sales world. Pretty soon, we hear ourselves repeating the same words over and over again which leads us to the same mediocre results. Take the routine sale and make it something to remember. Don’t just solve the problems your buyers face for now. Solve them permanently with bigger solutions that last longer. Add more service and warranty to your top options. Do something different and you will stand out from the crowd.

Waiting For An Answer – At the end of your sales presentation many sales people hear the words, “We want to think it over.” Instead of saying “okay” and offering to wait until they call you back. Why not bring the call to a definite conclusion at that moment? Remember that there are only four outcomes to every call:

4. You could schedule a date and time to get one of the above.

The Saints recovered that onside kick and went on to win the Super Bowl Championship. The secret that coach Sean Payton knew about winning was that you are more likely to do so by taking action instead of waiting for something good to happen. Are you waiting for good things to happen? Comedian Jonathan Winters had a great quote that I try to live by. He said, “If you are still waiting for your ship to come in, why not go swim out to it instead.”